After work, I head down to the gym. I avoid the treadmill like the plague because I have had to lather my thighs with vaseline to stop the agony of constant chafing. I am also being very careful about how hot I get- last time I went, I overdid it, and went to meet Esther and Lisa in Tescos afterwards. Along the way, I seemed to be the centre of attention. I felt like a guy from a Lynx advert, who has stumbled across the secret of universal seduction. I get the pansexual eye (girls, boys, dogs), and my ego inflates like a pull string dinghy, floating me along the street an erect penis’s height from the ground.

The problem is that although I think that I crave attention, if I ever get it, my brain melts and I have an ugly panic attack. I am starting to forget how to walk and to breathe when I manage to run into Tescos and find the girls.

I creep up behind Esther. I like creeping up on people. As Esther catches sight of the looming freak behind her, her face spasms in horror.

“Oh my god, you look like a beetroot” she says. 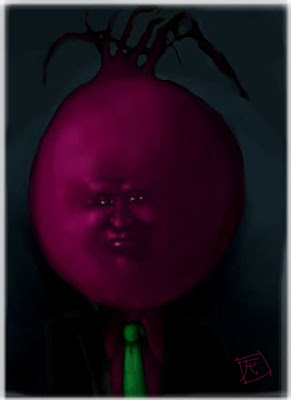 "Having exercised, I must go into hiding"

It turns out I had been waking along looking like a boiled lobster/sore thumb/busta blood-vessel comedy character, and that was the source of my allure. How disappointing.

I get to Lisa’s having escaped the gym in a milder hue of cerise.They must be in a good mood- there’s a cup of tea waiting for me. We all fall silent as we guzzle and read the trashy magazines lying around (Heat, Grazia, Look).

“What’s the point of donkeys?” says Lisa out of the blue.

“Some people just have fields full of them. What do you do with them?”

Nothing comes to mind.

“I spose you can stroke them” she reasons. Yes, that’s right. That makes sense to all of us, and we go back to reading.

“I just had a really strong urge to superglue my lips together” says Esther, again breaking the intellectual silence. I think it was my brain telling me what I wanted to hear, but no, she actually said it.

“I thought the tube of glue was Zovirex. When I realised it wasn’t, I thought ‘what’s the worst thing I could do?’ and I have to stop myself from putting it on my lips”. It’s a traditional bloke joke, to want the woman to shut up. I briefly feel a sense of belonging by wishing it too.

I reach for my special Blog notebook. The girls notice, and figure out what I’m doing.

After a few moments of tense, brain whirring silence, she blurts out;

“I wish I could transform my body…into a frog’s body! Ha, then everyone would love me.”

She pulled it out of the bag didn’t she? However it all goes downhill from there, so I put my notebook away in disgust. I need an invisible pen and pad really, or to do some serious ethnographic shit to live in this crazy uncivilised world with the natives till they forget I’m there. Oh, wait…

"I was invisible till I got 3rd degree sunburn"

Saturday was spent with my rabble-rousing blud, Hunter. We wiled away the afternoon by chasing the ghost of student protests. On the way to join the anti-capitalist march, we stopped off at Topman so Hunter could try on a snazzy skinny fit suit. He was keeping pace with the students on Twitter

“They’ve smashed up Vodaphone” he said with glee. “And they hassled Topshop.”

I bet Gap and Starbucks are really happy now that shouting about foreign problems has become passe.

The closest we got to disorder was a hen night shrieking on Deansgate.

Here’s what we missed:

I love the ‘Down with Stuff’ sentiment. Nice and vague.

How bored does he look? I would have cheered him up by saying stupid jokes like “Do they sell fridges in Selfridges?”

fast forward a few hours, and me and Hunter start to drink. Things are a little hazy after this point, but I remember calling a chav girl a C*^* and then working really hard to convince her that it was term of endearment. She believed me too, the fool!

I also remember 2 house parties and the next thing I know, I wake up in Hunter’s mum’s bed.

Thankfully for all concerned, she wasn’t there. It took me several vacant moments to figure out where in the world I was.

The next surprise was that I had lost all of these things:

This really is a record for me. A new stupidity high. So now I had to make my way home like one of those people you hope don’t sit next to you on the train; the smelly, red eyed, muttering figure who breaks social codes with every frazzled second of public appearance. This walk of shame lasted 2 hours and took in the ‘I’m so perfect’ hills of the Peak District (meh) , Carphone Warehouse (what is a car phone?) and McDonald’s. A chavtastic end to a lost weekend.

"Here's to many future toe-curlings"