This is my song of the day, “I AM IRON MAN…HEAR ME DITHER”

Esther and Lisa are babysitting their nieces and nephew tonight.

In order to last the night, I bought:

Tonight is a perfect night to prove my worth as a human being. I can feed the pets, feed myself, watch TV and go to bed at a reasonable hour. Simple.

Everything runs smoothly until I get to Lisa’s house to pick up Goldie. I can’t decide whether to feed Devo or not. I just can’t decide. Indecision is me. After much thought, I ring Esther and ask her advice.

She says “Do what you think” and abdicates responsibility.

The trouble is I don’t think anything. I can’t procrastinate until Esther does it for me. I can’t pretend to concentrate on the conversation, knowing full well that Lisa and Esther will chatter on without my input. It’s down to me.

So I ring up Esther again. And again. Until she inadvertently makes the decision for me.

Now I’m watching Being Human with a cat on my bloated pizza-stuffed belly, and a dog’s chin on my shins. Just right.

What would I rather be: a ghost, a vampire or a werewolf? No brainer- vampires get hot action and get to be history. 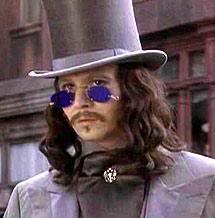 "Who are you calling history?"

I used to be obsessed with Coppola’s Dracula film- for a start it had my all time perfect woman Winona Ryder, who dumps uptight Keanu Reeves for sexy Gary Oldman as Dracula. I wanted to be him so much. I bought some blue sunglasses like his and I used to stalk around Sainsburys looking for victims. Once I mouthed his line “See me! See me now” at some winsome teenage girl and she looked straight at me as if spellbound.

"Yes! The rohypnol seems to be working"

Of course as soon as she saw me, she turned away in revulsion, but the moment had briefly been mine. It never worked again though.

Dennis Pennis is in this episode of Being Human. Best sleb name ever? It is for a fifteen year old; the age my humour stopped growing. Here he is winding up Jean Claude Van Damme…