So I’ve been trying to write a little something every day, even if its just a line or a paragraph of gobbledook hot from the stickier bits of my brain. I try not to care what I’m writing about (yeah like that ever happens) – the point is to do something. It’s about tricking my brain with a kind of procrastination (from writing my novel) that is accidentally also action. And it’s all saved in this mammoth document I call morningcrapski which tells you when I do it and what happens when I do. Over the course of a year I’ve amassed 30,000 words in there, most of them stupid or annoying or whatever but words nevertheless (or is it nonetheless? I digress).

I googled morningcrapski and this came up. Me neither.

So I thought I’d start using these words somewhere or else they’ll stay stuck in their tarpit forever. Here we go, a micro-story that emerged whole out of my cranial cesspit (ok I made it make sense a little teeny tiny bit more than it did):

I make bangles for passing tourists, which I sell from the pavement in front of my parent’s house. I always include a tiny gold penis in the design just to amuse myself. I tiny gold one, hidden among the reptiles and prehistoric fauna that I was obsessed with at the time, and which twisted from left to right across the endless plastic surface. I made them by laying out strips of perspex I found at school in the sun all day, then grappling with them on a vice I got out of grandma’s shed – to find it I had to push through the hanging shears (which she used to cut Freddie’s hair every summer), and past the table where she laid out the dead frogs after grandpa had mown the lawn. It was caked on, the stuff that came out of them, a sludgy sort of green, and she said eventually she would have enough. We never knew what for, and I hope I never do. Slippery and deceitful, adults, they stand so solid but it’s all a mirage. I get tangled in their roots every day even when I’m ten feet away from them.

Every day that Summer, I sat there and sold my profane trash and under the fold-up table I counted up on one hand my coins and on the other I added up all those sexy glances from tourists and passersby that lifted me out of my seat and threw me against the garage door. I sat there and counted them all and once in a while I’d confetti the whole lot across the lawn just so I could start again.

Important moment: the sun was going down and stretched out a leery hand to my bandaged ankle that I got from falling in the river near where the big rocks grow, and I heard a sound more machine than animal and it sort of went ‘gnner-gnerrr’ and then stopped and when I looked round to see where it came from there was a man leaning there against the neighbour’s pebble dash with no smile, no nothing for me except an attache case in his hand that I didn’t much care for. Before I had time to get scared, I chased him away with my bare hands.

Three nights later he crept back. I hadn’t expected to fit in his attache case and in all truth I didn’t, except taken apart and put back together in odd ways. And so that was that and I lost my bangle business forever.

As you can tell, when I say to myself ‘write something proper’, I seem to have it got into my head that cutesy mid-western americana is the way to go. So far, so Vernon God Little.

Since my last post, I have started an MA in Writing at Sheffield Hallam University because (a) it’s free to staff and (b) therefore it’s free to me and a distant (c) by the end of it you have to have produced an ENTIRE novel of some 80,000 words or they don’t let you out of the building and you have to clean the toilets, one cubicle per word you haven’t written.

I was worried that my writing would be too far out for tutor Jane Rogers, whose serious but sex-filled book was made into a TV programme in the 90s that I remember squirming on my seat to as I watched with my parents. Luckily, the Young Conservative beat me to it last week and submitted a novel extract that was so un-PC PVC sex, drugs and depravity filled I couldn’t and shan’t compete.

A pictorial illustration of his story

I’ve also been reading nonstop as I read somewhere that all writers have to read at least as much as they write (I am cheating on the last part). I was sent a review copy of In Real Life by Chris Killen last month; the press release came with a pack of sweets attached (which I still haven’t eaten). There’s no getting round it; it’s a disgustingly hipster thing to do. My review of the book is here. 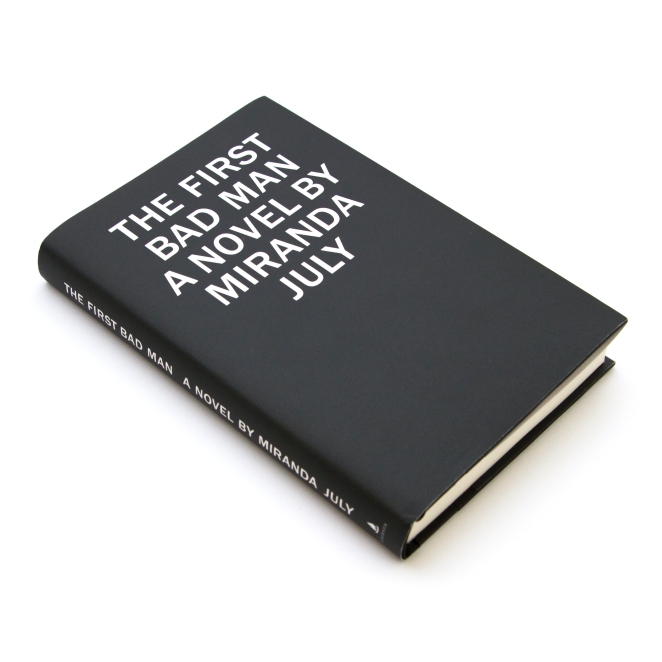 But not the first black book

Talking of disgusting hipsters, I’m currently reading The First Bad Man the novel by Miranda July. I didn’t want or expect to like it because her work up till now as a filmmaker-artist-yada-yada epitomises that ethereal hipster aesthetic that unless you’re immersed in catches at the back of your throat like someone’s gone mad with an atomiser.

And yet… The First Bad Man is

THE BEST BOOK I HAVE EVER READ.

Do I really mean this? I…think…so. Erm. So far.

My kindle tells me I have 2 or so hours left in its world and so far it is the silliest, saddest and most (and I want to puke as I write this) heartwarming (bleeeeuuuuuurrrrgh) piece of fiction I’ve ever passed my eye across. What kind of freak wants their heart warming anyway? Turns out it’s actually quite pleasant.

The protag Cheryl is a brilliant anti-vanity project for the porcelain skinned hipster-queen author: a middle-aged frump with some undisclosed but brilliantly awk empathy-disability (mild Aspergers?), who’s in unrequited love with one of her bosses at work. She gets lumbered with the daughter of another boss, a young buxom bully called Clee who comes to stay and instantly dominates Cheryl’s house. But then something happens; Cheryl borrows some naff self-defence videos from work and begins to rehearse the victim roles. One day, she comes back to find Clee has been watching too…. The messy role play that happens next and keeps on happening made me laugh so much that I had to stop reading it in bed while Esther is asleep.

July is touring the book in America before popping over to the Southbank Centre in London in two week’s time. I’m considering getting the train down there to see her – it’s that good!

I will leave you with one of the last things I found in morningcrapski (I’m making it sound like one of those found-footage horrors, which it kind of is). It’s a disturbing email from some oik in my head:

I want to buy your name. I must have it, all of it, immediately (well, I’ll give you a week seeing as I don’t know how often you check your emails. Yes, I think a week’s more than fair). I am offering £60. Can you really say no to that?

So by my reckoning, that’ll be £20 for a fair and legal swap.