What I have learned from TV:

I am the latest in our group of 3 to buy an all in one suit. I got a tiger outfit from Primark. Lisa has a mouse suit that she wears so much, which is actually a rabbit suit from France. Esther has a pink dogtooth outfit, with a self-made split to allow toilet visits. A common grumble is that they can’t wear their all in ones to the shop without facing ridicule and humiliation.

Lisa pulls a face.
I begin to think about Chavs and why we hate them. Could it be coz we are all middle class snobs? Chavs wear leisurewear without shame, as a symbol of not working, or of having the kind of job where it doesn’t matter how scruffy you are: labourer, binman, dinner lady. And we pride ourselves on wearing our status in its crisp, clean smartness.

There’s a class war still on, and we are instigating it. It offends our bourgeois sensibilities to see other people who care less about being smart and presentable. We believe that neatness and conspicuous consumption demonstrate a civilised mind, but who are we kidding? We’re just keeping up with the Joneses, a well-groomed dog v. dog fight.

"I mourn the loss of stuff the world over"

News: A man was arrested for burning poppies during the 2-minute silence. What law is this breaking? Annoying nationalists? Surely that’s one of the pleasures of life?
And what about the student who pissed on the memorial wreath? It makes me so angry I want to wank on one, or have projectile diarrhoea.

Why do people insist on dredging up the milked-dry corpse of war with perverted pleasure? There was nothing great or respectable about it, it was nasty, immoral, greedy. We didn’t have right on our side, we just had the bomb. I can understand why we shouldn’t forget the horror. But there’s a whole other side to it: thinking it was our greatest moment is like when people say that school was the best time of their life. Only psychopaths and bullies liked school- only soldiers like wars, and only bullies become soldiers. Fuck off to Afghanistan and die, bullies.

I’d like to write a history of Hatred. I wouldn’t talk about wars and violence and rape because they are more about power than dislike. Instead, I’d write about the anger that drove Johnny Lydon to scrawl “I HATE” over his Pink Floyd T shirt.

People define themlselves against what they don’t like- I find it easier to reel off a list of things I detest rather than what I love. Rappers don’t sing for their fans, they sing for all the haters.

My all time favourite prick/genius, Malcolm McLaren (he created Bow Wow Wow by getting a 14 year old schoolgirl to sing with Adam Ants band and he got Adam Ant to put makeup on), once created a tshirt manifesto which set out the battle lines for punk philosophy. At the top it said

‘You’re going to wake up and KNOW which side of the bed you’ve been lying on…:’

Then came 2 lists- one of the pitiful remnants of a stagnant culture, the other of future heroes…

This kind of idea has been boiled down and refried a million times over, and now gives us Heat magazine’s Manometer and the Guardian Weekend’s Barometer of style.

These reflect products the authors have an interest in promoting, or ideologies they buy into (high end fashion/macho men).  But I still believe that setting out your aesthetic boundaries is a way of defining yourself:

It used to be simple. I hated:

Now my hates are more varied and confused:

Scrubs/Two and a Half Men (most popular show in America? You sad fucks)

Yuppies and Chavs- the middle class is best

Christians- you creep me out with your ability to ignore facts

David Cameron and his cronies- Your face and your voice make me want to puke you smug wet lipped posho with plastic hair.

Jodie Foster. She is the most private famous person ever, and I’m sure she’s a lesbian.

(Sorry I’m bored of you now)

Canada (coz America hates it)

The sick fuck film producer Jud Apatow (40 Year Old Virgin, Superbad, Knocked Up, Funny People) These films have something deep to say about men. I haven’t worked it out yet tho.

Seal and Heidi Klum: the best celeb couple EVER because they don’t give a shit what they look like: 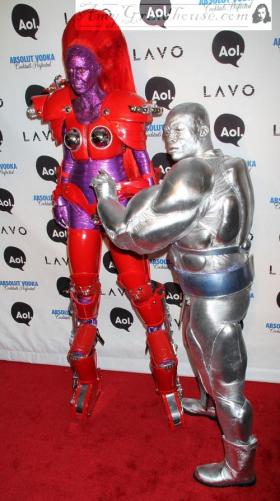 However, the older I get, the more that the hate list begins to appeal, and the more I despise what I used to like. I have sudden revelations: that a Coldplay song is really good; M People did some great songs. Coronation Street isn’t so bad. WTF?! Lady Gaga? What was I thinking?

The hate list shows exactly what my prejudices and snobbery are at that moment in time- whatever I afraid of or jealous of. Then at some unspecified stage, I become less uptight and the stubborn refusal to like certain things mellows.

Ooh look, Strictly Dancing is on.

I’m gonna shoot the frickin TV and piss in the holes. Bruce Forsyth is everything that is wrong with family entertainment.

Nope, still got some hatred in me.