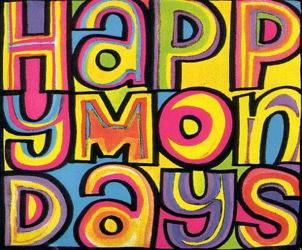 Last Monday was apparently the “happiest day of the year”. It was Happy Monday, that celebrated day of old when Shaun Ryder woke up in his own vomit and decided to form a band. What a crock.

IMAO ‘the happiest day of the year’ only happens once a decade, when the Summer forgets to be so darn British and goes all out.

However illogically, most years just don’t have a best day, only lots of worst days.

Me and Esther are moving house soon. This means downsizing, which means that Esther is going to get mean on my ass.

We start at the top of the house.

“We don’t need any stupid books!” she yells as I try to slip some into the ‘Keep’ box. “You can get books online now”
“But you can’t write on them or change them at all” I say falteringly. Why the hell do I want books?
“You can print them off” she retorts
“You might as well buy them if you’re going to do that!” Ha! I try to fault her logic
“Print it off then throw it away when you’ve read it. It’s so old fashioned to have books” She says scornfully.
I must work out more surreptitious ways to save my precious paper antiques.

“Old fashioned” really cuts me to the quick. My hip self image, with it’s jacket over the shoulder and ‘jazzy’ socks, starts to cry. Damn it.

I feel like Marty McFly being given a dressing down for his fashion sense:

Anyway why should I be taking advice from someone who only reads picture books?

I’ve got the girl of my dreams- and just like a dream, she’s pure illusion.

Our rules of interaction are:

Plato would be proud of us. And Jesus. Shame they’re dead and I hate them.

We have a tea break from packing. In bed. Quietly, Esther gets under the duvet. I turn round, and before I can criticize she shouts

Instead I watch the news. “Closing libraries will kill communities!” is the Liberal crusade of the week. Bullshit. Libraries are just full of mentally ill people who have nowhere else to go. Sheffield City Library has its own regulars: a man who sets up shop next to the Frank Zappa books and conducts a tea party with his multiple personalities, several people who pretend to read comics while they blatantly stare at normals over their glasses, people who try and have a shower in the toilet wash basin (one limb at a time). Oh and people who like to complain about the absence of porn in the video collection.

And then there’s the zero emission neo-hippies who come in with their fold up bikes and faint whiff of hemp, who hover like angry flies around the ‘Environment’ section and sneer at the materialists ogling the chick lit.
Where would these lost souls go instead? The public toilets? Charity shops probably, to get naked in the changing room or to repeatedly ask if any of the clothes are made with organic cotton.

Whenever I start to rant, I want a write a Manifesto. So far, all I can think of is:

Thinking like this made me wonder if I would enjoy gay sex.

I was discussing foursomes with my good friends Demi and George, and I realised that I am willing to have a penis up my bum, if at the same time I have my penis in a vagina.

And vice versa. Or some spit roasting; I do like KFC.

“Yes” George said, reminiscing, “I do quite like it with a finger up me”.

Whatever feels nice goes, I say.

Comeback no. 64: “Do you sit on someone’s face with that bum?” I’m not sure yet what context this will suit, but I’m convinced there is one.